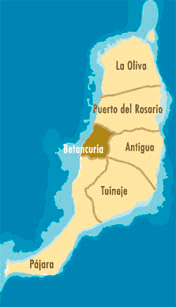 Betancuria, the historic capital of the
Canaries
Discover a destination that is as rich in nature as in history, culture and tradition.
Let yourself be infused by its picturesque rural houses that are full of life and with a taste for the past, which provide direct contact with traditional farming activities and invite you to experience the open and hospitable Majorero people's character and their hundred year old culture.

Betancuria's essence is its wild and virgin nature, its landscapes dotted with palm groves, badlands, valleys and ravines, volcanic cones and hidden caves.
The interior surprises with its flora and fauna and unique, natural, beautiful and outstanding areas, with a high cultural and scientific interest. 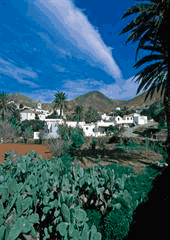 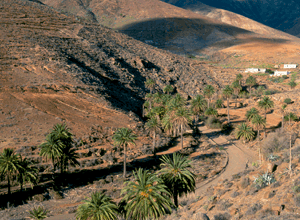 History
Santa María de Betancuria town was founded by the Norman conquerors around 1404 and it was the second settlement that was created in the Canary Islands although it is considered as the first city built on the archipelago. The reasons for its position were military, given its position between mountains and far away from the beach, which made its defence against attacks easier.
Betancuria, the old Fuerteventura capital, took its name from its conqueror, Jean de Bethencourt.
It still has enormous historic value as it is considered to be the first capital of the Canary Islands, with the first monastery, first cathedral and episcopal headquarters in all of the archipelago. 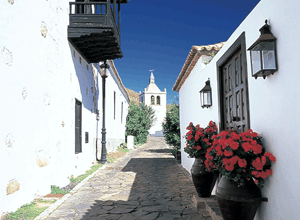 Culture and tradition
Its long historical trajectory has left its mark with the survival of a rich cultural and artistic heritage, and Betancuria was named a Historical Complex in 1979. This Historical Complex is an compulsory visit for all those people who are interested in the culture generated on the island over time.
Significant Architectural Works
Santa María Church, San Diego chapel, the Museum of Sacred Art, the ruins of the San Buenaventura Franciscan Convent, the Archaeological-Ethnographic Museum and all the many examples of domestic architecture are witness to the historic importance that Betancuria had and continues to have.

Observation Point
The Morro Velosa Observation point is situated in Betancuria Rural Park, at the top of the mountain of the same name, between Betancuria and Santa Inés Valley.
It was designed by the artist from Lanzarote Cesar Manrique and from its installations you can see the full view of the beautiful landscape of plains, volcanoes and trusses that form northern and central Fuerteventura.
Also next to the observation point we find the giant sculptures of Guise and Ayoze, the chiefs of the two kingdoms the island was divided into in Aboriginal times before the conquest.

Nuestra Señora de la Peña Chapel
Dedicated to Fuerteventura's patron saint, it offers special historic and cultural
interest, as well as the procession that takes place each year in her honour every September. The island's inhabitants make a pilgrimage dressed in their traditional costumes in a festive atmosphere towards Vega de Río Palmas.
Santa María de Betancuria Church
The first church in the Canary Islands, it was built around 1410 and is located in the historic centre of Betancuria, and is full of history and beautiful architecture. 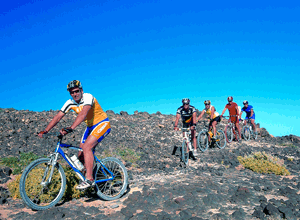 Leisure and complementary offer
Trekking and Mountain biking
Taking part in trekking and mountain biking is the most direct way of discovering this small virtually unknown paradise's nature in its pure state.
There is a network of recently opened paths and it is an ideal terrain with routes of great geographic diversity for bike lovers and walkers with different levels of
difficulty, which invite you to enjoy your holidays actively and healthily.

Eco-Tourism and Agro-Tourism
Fuerteventura, declared a Biosphere Reserve throughout its island territory, is the ideal destination to experience and feel in close contact with its unpolluted nature.
Betancuria Rural Park is the perfect location for Eco and Agro Tourism. Bird watching the birds that choose the island to pass through and nest, the indigenous fauna and flora of unmeasurable value, the badlands and beautiful landscapes as witnesses to its volcanic origins, surprise everybody that is looking for more than sun and beaches. Breathtaking secluded and protected places for those that seek peace and tranquillity or to gaze at the spectacular panorama of a sky dotted with infinite stars at night..
The little villages still preserve their traditional farming spirit and offer an attractive rural offering with unbeatable quality in their services and exquisite customer service.
They also invite tourists to observe and take part in their daily lives on some of their lands that are dedicated to their award winning goat's cheese, crafts and working in the field. Each spot is a treasure waiting to be discovered. Each spot is a treasure waiting to be discovered.